Email got its start in the late 1970’s but it wasn’t until the mid-1980’s and the personal computer revolution that things really took off.  Software to manage email lists first appeared in 1986 when Eric Thomas created LISTSERV the first group email software.  At this time it ran on wardrobe size mainframe computers.  Eric developed LISTERV at CERN where Tim Berners-Lee was creating the world wide web.  Over the years LISTSERV was ported over to other operating systems eventually hitting Unix in 1994 and Windows in 1995.

As personal computers became more common place in homes and offices programs like Lotus Notes and Microsoft Office emerged with email and the ability to group email addresses together.  Even though this type of group email was limited to only grouping people within the same corporate email system its ease of use made it a huge boon to companies who created group email addresses for everything.  This was the first exposure to group email for many people.

In 1999 the GNU project created its own mailing list manager MailMan.  Developed by John Viega and Ken Manheimer this was a free software, open source alternative to LISTSERV matching many features which people came to expected from their group email system; searchable archives, moderators, privacy features, a web Interface, spam filters.

As the dot-com bubble grew and burst in the early 2000’s the number of email users and people exposed to group email grew exponentially from 10 million email users in 1995 to 500 million in 2000 and 1 billion in 2007.  By this time email was a part of everyone’s on-line life and using group email was just part of that.

Gmail arrived in 2007 and even though Blackberry had been putting email in people hands since 1999 it wasn’t until the iPhone and the smartphone revolution that made email truly mobile for huge numbers of people.  Indeed, the mobile revolution made email user number sky rocket even more hitting 2 billion by 2010 and 3 billion only one year later.

During all this time LISTSERV is still going strong being actively developed at L-Soft and running most the biggest and busiest email lists in the world.  Within offices and corporations emailing groups of people is second nature; a department, project or team doesn’t exist until it has its own email address!

With the ubiquity of cloud computing and the rise of SaaS (software as a service) businesses it was inevitable that group email would move with the times and reap the benefits of everything that widely distributed computing can offer.

We’ve just rolled out a new pricing structure which we think is simpler and fairer than what we had before.  Instead of fixed tiers for certain amounts of members we now have one price based solely on the number of members in your groups.  It seemed unfair that previously if you went from 500 members to 501 members your costs would double from $80 to $160 per year! 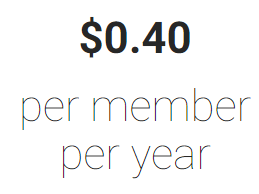 So now you pay just $0.40 per member/per year whether you have 50 or 1000 members.  You can still pay per month at $0.04 per member/per month but paying annually you effectively get two months free for a saving of %15!  All features are always included whatever you’re paying so there’s no need to worry about Standard vs. Mega Deluxe Gold plans.

We do have a minimum paid group size of 25 members simply because with transaction fees it’s really not worth us charging less than $1 per month or $10 per year.  If you have any questions about billing or anything else then please get in touch.

After introducing the ability to compose new messages last month we’re pleased to announce that you can now reply to messages directly from within Gaggle Mail. We’ve rearranged the layout of the message popup to now show ‘Reply to Group’ and ‘Reply’ buttons.

As you can imagine clicking ‘Reply to Group’ will open the message for editing and pre-select your group address as the recipient. Likewise the ‘Reply’ button will open a reply going to the original sender of the message. 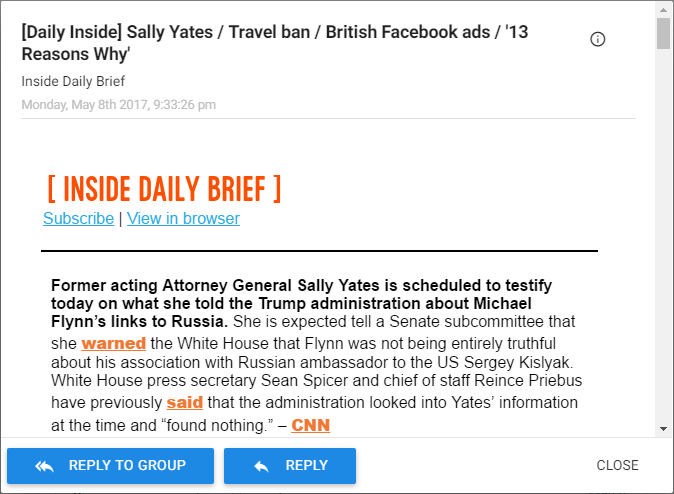 The ability to reply to messages from within Gaggle Mail gives us the opportunity to fulfil a long term user request and that is the ability to reply to messages send in a daily digest. We now include a ‘Reply to Message’ button at the bottom of every message listed in digest emails. This now makes the Daily Digest feature a much more viable option when you want to remain part of the conversation but not get overwhelmed. 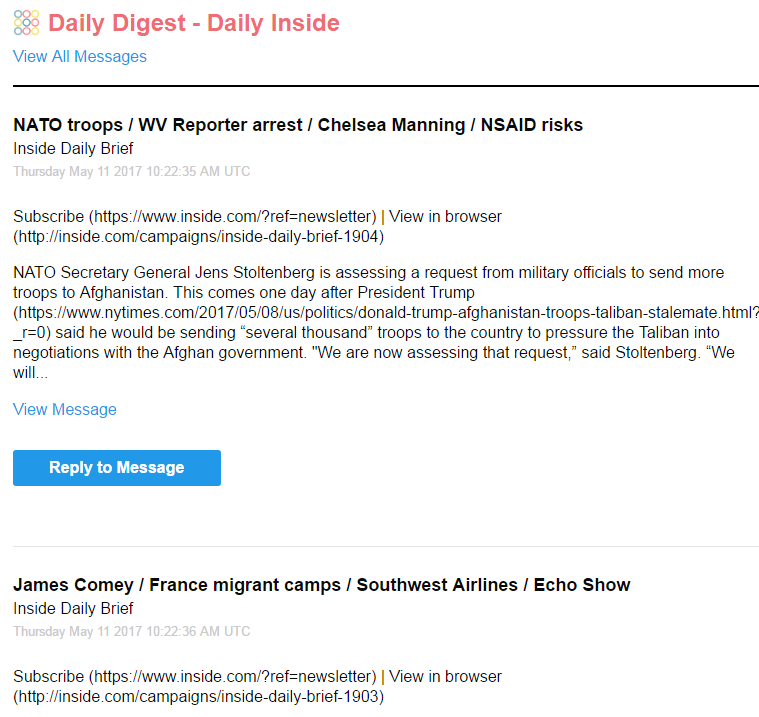 As with many features we build this came about from a user suggestion so if you have any ideas of how we can improve Gaggle Mail or make it work better for you then we’d love to hear them.

Sending a message to your group has just got even easier; you can now compose and send messages directly for the Gaggle Mail web interface.  The full functional text editor allows you format your message with ease.  Adding links, lists or images is a breeze using the toolbar actions.  You can even directly edit the HTML generated for your message to give you even more control.

This feature works great on desktop or mobile and is easily accessed from the Compose button on the top left (desktop) or slide-out menu (mobile). 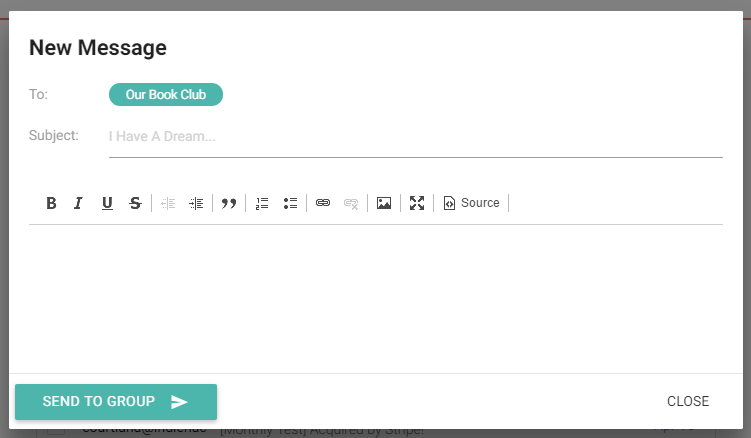 As with all features we add to Gaggle Mail we’re really tried to keep things as simple as possible, you just type in your message and hit send – that’s it!

We are also planning to add the ability to reply to messages directly from our web interface which will be especially useful to people using the Daily Digest option – so watch this space.

I’m delighted to let you know that we’ve just made adding members to your group even easier.  You can now drag and drop a .csv or Excel (.xlsx) file containing member names and email addresses directly into Gaggle Mail and we will extract all their details and prepare them to be added to your list.

It now takes just seconds to go from zero to 1000 members! 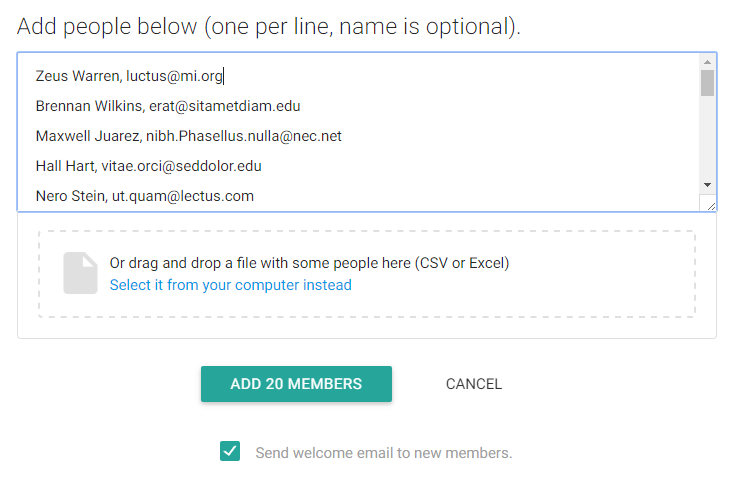 You can still directly enter member details or copy and paste them into the text area to get them added.  As long as each member is on a separate line then they can be entered in a wider variety of formats; comma separated, tab separated, email address first, name first or just email address on it’s own.

If any of the addresses you are adding already belong to members of your group we will let you know, as well as if the list contains any duplicate addresses.

We hope you will find this streamlined approach to adding members to your group both more powerful and easier to use.  If you do have any feedback about this feature or anything else then please do let us know.

Gaggle Mail is all about making group email as easy to use as possible.  With that in mind we’ve just released an update which makes setting up your group even easier. Now when you create a new group with Gaggle Mail we show you a quick setup up wizard that walks you through the main customizations that are made to groups.  These few steps explain what each setting does and how it affects messages being sent across your group. 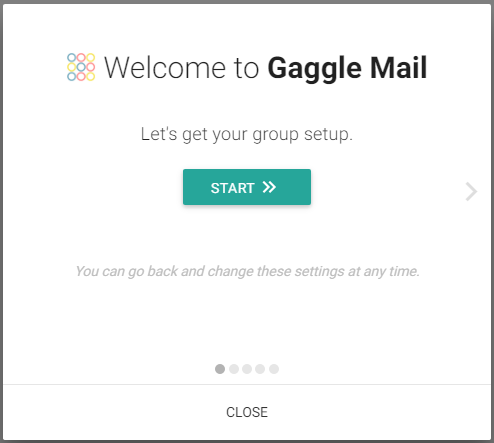 This setup process is totally optional, you can quit it at any time and go back and change any of the settings later at any point. We have always been about making group email discussion lists as easy as possible to use and opening them up to an audience that would have previously been put off creating one.  With this new step-by-step approach to getting your list up and running we think we’ve made things even easier. As we’ve previously said “If you can use email, you can use Gaggle Mail” this is now truer than ever.

Google Groups has been around for over 15 years (launched in 2001) and is very popular with small clubs and groups. Like most of Google services Google Groups is free with Google making it pay by showing ads and analyzing your groups data to better target more ads at you.

Google Groups has not had a major update for years, it’s in maintenance mode, they’re keeping it running for existing users but it doesn’t get updated or improved.  Google does have a history of shutting down services that that it no longer considers strategic and Groups would appear to be in that category.

If this makes you worried and you need a modern, secure, reliable way to share news and messages with a group of people why not try an email group with Gaggle Mail.  All you need to participate in an email group is an email address and everyone has one of those.  With Gaggle Mail there’s no need to have a specific email account (I’m looking at you Google and Yahoo!) just use whatever email address you already have.

All groups on Gaggle Mail have a fully searchable message archive, customized subject lines and email footers, web group sign-up, incognito mode for enhanced member privacy and may more features.  Your members will love the simplicity and flexibility of using a modern dedicated group email solution.

If you use Google Groups to run a group discussion list and you’re worried about data privacy or it’s longer term future then give Gaggle Mail a try.

See why thousands of groups have moved to Gaggle Mail with a 30 day free trial.

With this feature enabled your group will continue to work as usual but the email addresses of other members will be hidden.  You can still reply directly to a member however this will use a proxy email address which will keep the original senders address hidden.

You can read more about this feature here.

With customized email footers, a choice of delivery options (reply to group, reply to sender) and full delivery reports, you can see why thousands of groups – large and small - appreciate what a dedicated group email platform can deliver.

However beyond features the thing that separates us from other offerings is the easy and simplicity with which anyone can get started and run a group on Gaggle Mail.

Our motto is “If you can use email, you can use Gaggle Mail” and it’s something we really stand by, creating a group, adding members, sending message and checking the health of the group are all thing’s we’ve put huge effort into making as simple as possible.

So if you want a dedicated group email provider which just works - is full featured but takes ease and simplicity really seriously then take a look at Gaggle Mail.  With a 30 day free trial (no credit card required) and groups from as little as $10 per year you have nothing to loose!

Our daily digest feature is very popular allowing people to receive one digest email a day. However if you’re not actually receiving the individual messages then you can’t reply to them and join the discussion. Until now. 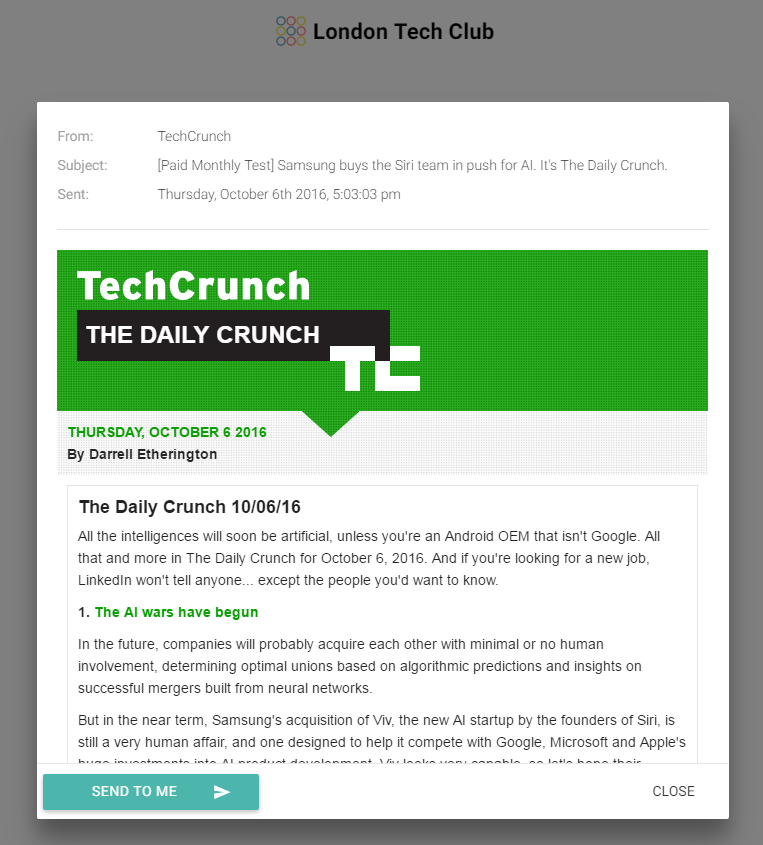 Now when you receive your daily digest and click the link to view the original email we show you a “Send to me” button on the message to get it straight to your inbox giving you the opportunity to reply.